Snake, pythons & monkeys on board a SLTB bus 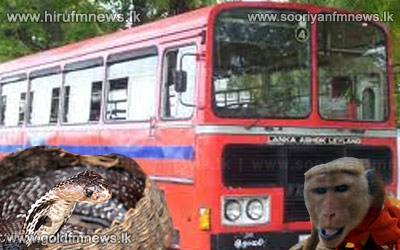 An incident where commuters on board a bus were inconvenienced due to several snakes & monkeys running amok on board a bus is being reported from the Galagedara area in Kandy this morning.

Commuters on board the bus operated by the Sri Lanka Transport Board plying from Kandy to Kurunegala had phoned the police stating that they were posed with a threat to their lives owing to the beasts behaving uncontrollably within the bus.

Subsequently the Galagedara police who gained control of the bus had discovered that the beasts had escaped the custody of four gypsy men, who had been severely under the influence of alcohol.

9 snakes, 2 pythons & a monkey were subsequently seized by police, while the four gypsies were also placed under arrest.