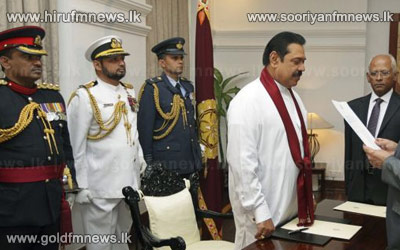 Subsequent to today's cabinet reshuffle 5 new ministers have been appointed to parliament.

The previous cabinet including the premier consisted of 50 Ministers.

With the inclusion of the 10 Senior Cabinet Ministerial portfolios & two project ministers the number of government party cabinet ministers has been increased to 67.

According to today's cabinet reshuffle Minister Anura Priyadharshana Yapa was sworn in as the new minister overlooking the operation of Petroleum & Petroleum resources while Minister Susil Premajayantha was appointed the new Minister of Environment.

Jayantha Hearth meanwhile has been appointed as the Minister of Botanical Gardens & Public Recreation.

The days cabinet reshuffle also witnessed Duminda Dissanayeke being sworn in as the Minister of Educational Services while Basheer Segudawood was appointed the New Minister of Productivity Promotion.

Minister of Power & Energy Pavithra Wanniarachchi expressing her views to our news team made the following clarifications regarding her future plans for the ministry.

Minister of Wild Life Preservation Vijith Vijayamuni De Soysa meanwhile when contacted had this to say.