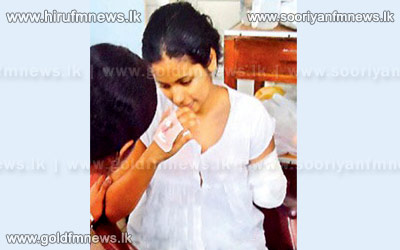 The inquiry regarding the amputation of the left arm of law student Achala Priyadharshani who was admitted to the Matara General Hospital following a fracture has been concluded.

Due to the nerve damage in her arm, the doctors in the Colombo General Hospital had amputated her arm.

The ministry of health had appointed two teams to inquire into the incident and one team comprised of 3 specialist doctors.

Speaking to our news team Medical Services Director of the Ministry of health Dr. Lal Panapitiya gave the following update on the inquiry.

A group of law students from the faculty of law in the Colombo University has lodged a complaint at the Human Rights Commission stating that her human rights were violated.

Senior Attorney at Law and Commissioner of the Human Rights Commission Prathiba Mahanamahewa provided the following update with regard to the investigation of the complaint.

Various parties are blaming the doctors who treated Achala Priyadharshani and holding them responsible for the amputation of her left arm.

However, the Government Medical Officers Association is stating that it is unfair to level accusations until the investigation is concluded.

The media spokesperson of the GMOA Dr. Naveen De Soyza expressed his views in the following manner.

Minister of health Maithreepala Sirisena had visited Achala Priyadharshani recently at the Colombo General Hospital and opposition leader Ranil Wickramasinghe had visited her today at the hospital.

Former vice chancellor of the Colombo University and former Dean of the Law Faculty Prof. G. L. Peiris' attention has also turned towards the plight of Achala Priyadharshani.

The Colombo Law Faculty Students union was scheduled to meet the minister today.

The Colombo law faculty has established a fund to obtain a prosthetic arm for Achala Priyadharshani under the theme An Arm for Achala, Justice for Negligence".