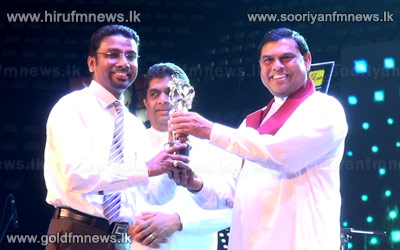 The awards at the Sandeshaya Media Awards Ceremony organized by the Ananda college broadcasting unit are conferred after a survey conducted under the supervision of the Mass Media and Information Ministry and the Colombo Statistics Department covering all provinces in Sri Lanka.

Initially the first survey report is prepared with the participation of GCE A Level students in schools representing all the nine provinces.

Similarly this mass media survey will be recorded as the survey conducted with the largest number of participants in the history of Sri Lanka.

Accordingly Hiru TV and Hiru FM were able to win all the main awards at the Sandeshaya Media Gala this time.

HIRU FM was awarded the best Radio channel in Sri lanka at the Sandeshaya awards ceremony.