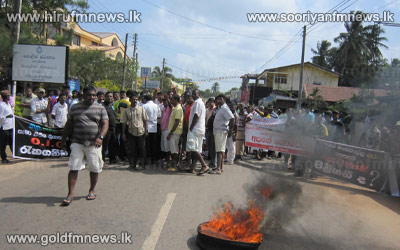 The residents of Madampe are currently engaging in a protest against the transfer of the Madampe Police Officer in Charge.

Residents who were conducting the protest near the Madampe – Kuliyapitiya Police Station stated that the transferred police OIC had stopped many illegal activities in the region including illegal drug use.

They also urged the authorities to reconsider the sudden transfer.

According to our region correspondent the protesters were burning tires near the Madampe – Kuliyapitiya Police station while engaging in the protest.