Somawansa steps up onto witness cage; Weerawansa summoned to court 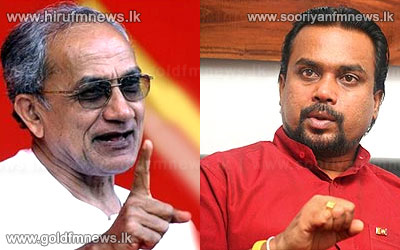 The Colombo Commercial high Court today arbitrated on the case regarding the book authored by Minister Wimal Weerawansa subsequent to his resignation from the JVP.

Minister Wimal Weerawansa was present at the Colombo Commercial High Court today on behalf of the defence while the leader of the JVP Somawansa Amarasinghe was in court representing plaintiff.

The case argues that the book titled 'Naththa Wenuwata Aththa', which was authored by Minister Wimal Weerawansa contains documents discussed within the Central Working Committee of JVP.

The Plaintiff argues that publishing the contents of these documents devoid of the permission of the party constitutes a felony under the Intellectual Property act.

An injunction order proscribing the publication, distribution & sale of the book has also been issued by court.

Subsequent to the day's courts proceedings Leader of the National Freedom Front Minister Wimal Weerawansa & the leader of the JVP Somawansa Amarasinghe expressed the following views to the media.

The case is to be once again taken up on the 20th of this month.