An attack on Chennai Bank of Ceylon branch. 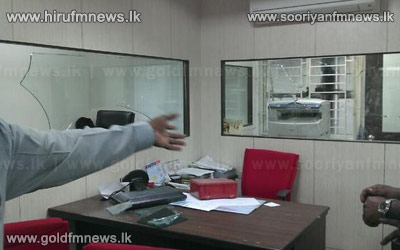 The Bank of Ceylon Chennai branch came under a mob attack yesterday evening.

According to an external affairs Ministry spokesman a group of persons had stormed the branch and assaulted the bank staff.

Two staffers who sustained injuries were rushed to hospital.

He said the bank branch has received severe damage due to the mob attack.

An external affairs Ministry spokesman said that security has been tightened in Sri Lankan business establishments in Chennai following this incident and the ministry has taken up the matter with the Central government.

India  police said Around 1.30 p.m. 12 masked men had arrived in trishaws and motorcycles at Jarret Gardens 2nd Avenue, Casa Major Road, where the bank in located in a two-storey building.

They entered the premises by pushing the two policemen on duty and damaged the guardroom and the bank’s signboard on the ground floor.

The attack lasted only a couple of minutes. Eight CCTV cameras installed at different spots in the branch recorded the incidents from 1.30 p.m. to 1.32 p.m.