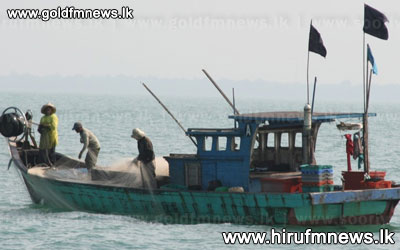 Five Sri Lankan fishermen, along with their boat and over 100 kg catch, have been apprehended by Indian Coast Guard for illegally fishing off Krishnapatnam in Andhra Pradesh coast.

Since January 2013, 26 Sri Lankans were apprehended; five fishing boats impounded and 330 kg fish catch were seized by the Coast Guard.

The Lankan fishermen took them to Negambu coast on February 5th where they were treated before being sent to Madurai.

Meanwhile, Maarten Bavinck, director at the Amsterdam-based Centre for Maritime Research said Indian trawlers are taking their toll on northern Sri Lanka's fishing sector which is struggling to recover almost four years after a war.

Since the conclusion of the war, Indian trawlers have been coming in closer and closer noting that over half of the 5,000 trawlers based in southern India are completely or seasonally dependent on Sri Lankan waters.