800 who protested against President Rajapaksa in India arrested 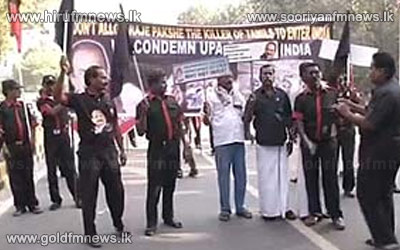 Indian media accounts state that around 800 individuals have been arrested at preset who had protested against the visit of President Mahinda Rajapaksa to India.

Meanwhile the Leader of the MDMK party in India Y. Gopala Swami has been placed under arrest by Indian authorities for having led a protest against visiting Sri Lankan President Mahinda Rajapaksa.

Waiko and his affiliates were arrested while they had been marching in a protest towards Premier Dr. Manmohan Singh's residence along Parliament road in New Delhi.

According to Indian Media around 70 supporters of Waiko have been arrested along side him.

Meanwhile the Indian Janatha Party chargers that Waiko has been exerting undue pressure on the visit of President Mahinda Rajapaksa.

Leader of the Party Dr. Subramaniyam Swami expressing his views in this regard has stated that the nature of President Rajapaksa's visit was purely religious and

Speaking further he had noted that it was an inspiring fact that a leader of President Rajapaksa's caliber was making a visit to India.

Meanwhile a gang had launched an attack on the Bank of Ceylon branch in Chennai last evening.

A bank employee & a security official had sustained injuries in the attack while security has been beefed up at present in the aftermath of the incident.