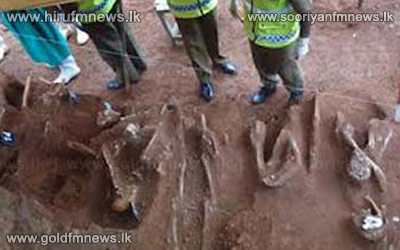 The excavation of the mass grave found in the Matale Hospital Grounds was concluded today.

Professor Raj Somadeva of the Postgraduate Institute of Archaeology in the Kelaniya University stated that the bone fragments will be sent to the judicial medical officer for tests.

In addition to bone fragments, fragments similar to coal were also uncovered and according to Professor Raj Somadeva those fragments will be sent to a lab overseas for carbon dating.

Speaking at a press conference held recently JVP parliamentarian Anura Kumara Dissanayaka alleged that the bone fragments belonged to the 1987 - 89 era according to initial reports.