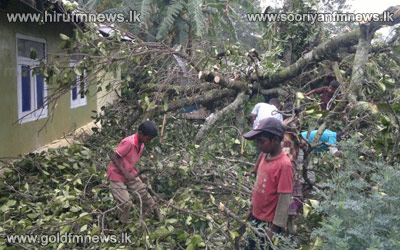 The National Centre for Disaster Management states that gale winds were experienced in 6 districts during the past 24 hours.

Speaking to our news team the Deputy Media Director of the National Centre for Disaster Management stated that the districts of Nuwara Eliya, Kegalle, Kandy, Kurunegala and Anuradhapura were affected by gale winds yesterday and today.

Our regional correspondent in Kekirawa reported that due to gale winds approximately 20 houses and 13 shops were damaged in the Rana - jaya - pura region.

It was also reported that the roofs of a 3 storey building in the Rana - jaya - pura Madya Maha Vidyala were also damaged and 3 students who were injured have been hospitalized.

Meanwhile, 20 houses in the Great Western Estate in the Nuwara Eliya - Thalawakale region have also been damaged due to gale winds and pilgrims to Adams peak also have faced difficulty to do the prevailing winds.

Upon inquiry by our news team duty meteorologist Merril Mendis stated that the winds were caused due to disturbances in the atmosphere in the South East region of the island.