President speaks of importance of English and unity 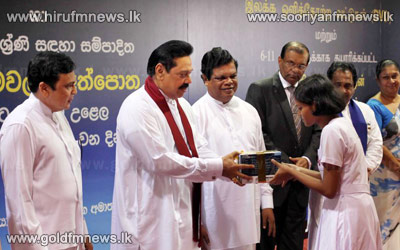 President Mahinda Rajapaksa states that the era in which the English language was looked upon in awe has ended.

Addressing a function held at Temple Trees today during which DVD's & handbooks were distributed to develop the English language capabilities in students, President Rajapaksa made the following observations.

Speaking further President Rajapaksa noted that it was high time to cast aside religious as well as ethnic differences & unite together as a nation.

Speaking during the occasion Minister of Education Bandula Gunawardhana

states that measures would be implemented in 2015 where students sitting the G.C.E. Ordinary Level exam would be awarded 10 marks each for effective English communication.