The election to choose Chairman of BASL concluded 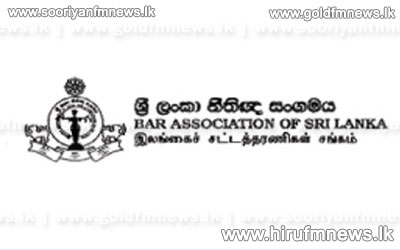 The result of the vote held to elect the new chairman of the Bar Association of Sri Lanka will be released around 7 this evening as votes are still being tallied.

Voting to elect the new chairman of the BASL for the 22nd occasion began at 8 this morning at the Colombo District Court and 73 other court complexes around the island.

Three candidates contested for the post of Chairman of the BASL during the election held today, they are Attorney at law Upul Jayasooriya, Presidents Counsel Tirantha Wala-li-yadda and Attorney at law R.R.S. Thanga-raja.

Parliament convened at 1.30 this afternoon under the patronage of Speaker Chamal Rajapakse.

During parliamentary proceedings today UNP MP raised a question regarding the transparency of examinations and this is Education Minister Bandula Gunawardana in reply.

Meanwhile 14 MP’s of the opposition raised questions in parliament today out of which only 4 questions were provided answers to by the government.

MP Dayasiri Jayasekara raised a question from the chair and Deputy Speaker Chandima Weerakkody replied in the following manner.