Secretary of the Headquarters for Supporting and Protecting Cultural Works in Iran says Buddhist statues are considered a symbol of cultural invasion. 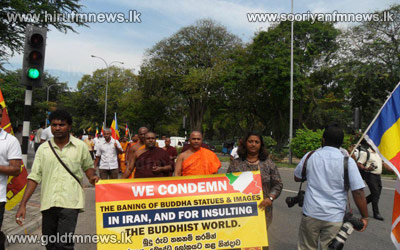 It was reported yesterday that Iran had banned the use and sale of statues of Lord Buddha within Iran which in turn created severe disputes within Sri Lanka.

Reports yesterday stated that the Secretary of the Headquarters for Supporting and Protecting Cultural Works in Iran Saeed Jaber Ansari has issued a statement to Iranian Newspaper 'Arman' stating that Buddhist statues are considered a symbol of cultural invasion.

However, Iranian Ambassador to Sri Lanka Mohommad Faisal Raseen stated that the Iranian government has not issued a ban as such.

However, the Sinhala Ravaya National Organization engaged in a protest which began from the Nelum Pokuna theatre and ended opposite the Iranian embassy today against the alleged ban on the sale and use of statues of Lord Buddha.

Following the procession the Sinhala Ravaya National Organization had handed over a letter to the embassy.

The Chairman of the Sinhala Ravaya National Organization Venerable Akmeemana Dayarathana thero stated that the Iranian ambassador had given written assurance that he will look into the matter.

Our news team inquired from JHU Western Provincial Councillor Udaya Gammanpila regarding this.