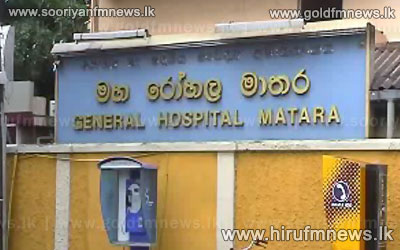 The Government Medical Officers Association states that it is considering extending the work to rule trade union action taking place in the Matara General Hospital to the rest of the hospitals in the Island.

Due to the work to rule trade union action initiated in the Matara hospital, the number of patients seen and the number of operations conducted have been limited at the Matara General Hospital.

The GMOA described this trade union action as the first step in a program aimed at increasing the quality of medical services.

The assistant media spokesperson of the GMOA Dr. Nalinda Herath had the following to say in this regard.

However, deputy health minister Lalith Dissanayaka stated that a report regarding the amputation of the arm of the law student was issued to fulfil the responsibility as medical officials to reply to it.

He further stated that one should not use such incidents as a reason and act in a manner that defiles the honour of one's profession.

Following the incident concerning the law student Achala Priyadharshani there were discussions regarding professional negligence in society.

Reports stated that the Law Faculty Students Union are preparing to conduct a survey regarding professional negligence of doctors and lawyers and inform the officials regarding that.

The convenor of the LFSU Jayantha Dehi-aththage made the following statement regarding this.

The National Intellectuals and Professionals Organization stated that creating new methodologies following surveys of professional activities is a good deed.

The chairman of the NIPO Dr. Chandana Abeyratne had the following to say in this regard.