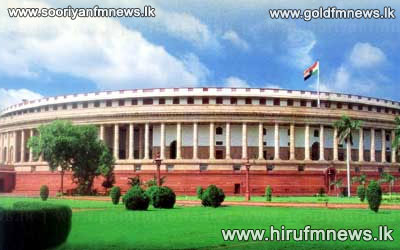 Both houses of the Indian parliament were adjourned today after the Bharatiya Janata Party staged a noisy protest over the Hyderabad bombings while in the Lok Sabha, there was added chaos with Tamil members denouncing "war crimes" in Sri Lanka.

AIADMK and DMK members were on their feet as the Lok Sabha met, flashing pictures of the slain LTTE chief Velupillai Prabhakaran's 12-year-old son.

There was uproar as they trooped towards Speaker Meira Kumar shouting slogans against the Sri Lankan regime.

Amidst this, BJP members began shouting slogans demanding suspension of question hour and immediate discussion on the Thursday evening bombings in Hyderabad that killed 16 people.

Similar scenes were witnessed in the Rajya Sabha where the BJP demanded a statement from Home Minister Sushil-kumar Shinde on the Hyderabad blasts.

Meanwhile leader of the Tamil United Liberation Front in Sri Lanka V. Anandasangaree says that India had & has a bigger role to play during and after the war.

In a letter to President Mahinda Rajapaksa, Anandasangaree had stated that India played a pivotal part with regards to Sri Lanka.

Moreover Human Rights Watch, a global human rights organization, is to release a highly controversial report on Sri Lanka next week which alleges rape and torture of detainees.

According to India's Hindu newspaper, HRW is to seek an international investigation into reports of sexual violence, rape, third degree torture against Tamil women and men carried out allegedly by Sri Lankan security forces to get confessions from those suspected to have links with the then LTTE.

The HRW, which has prepared a 140-page report, which provides detailed accounts of 75 cases of alleged rape and sexual abuse.

HRW's Asia Director Brad Adams expressing his views to the media has noted that United Nations Human Rights Council should direct the U.N. High Commissioner for Human Rights to conduct an independent international investigation in this regard.

In related developments, United National Party Parliamentarian Ajith P. Perera expressing his views during a media briefing held today opined that the government should present a sturdy team capable of handling the challenges faced in Genieva.

Moreover Leader of the New Socialist Front Dr. Wickremebahu Karunarathna during a recent media briefing noted that it was the responsibility of the government to ensure the rights of the countries citizens.