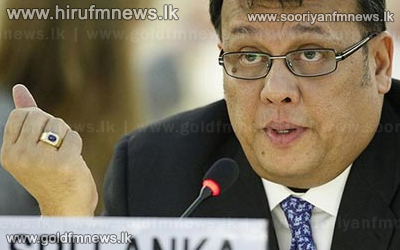 The Sri Lankan President's Special Envoy on Human Rights Minister Mahinda Samarasinghe who leads the countries delegation during the 22nd session of the United Nations Human Rights Council Session is due to reach Geneva today.

According to sources Minister Samarasinghe is said to have left the island this morning while he remains due to address the council tomorrow.

Following this was the high-level delegation talks on member states during which the islands ambassador to Geneva Ravinatha Ariyasinghe was also present.

Moreover the action group on the Vienna Declaration also convened yesterday on the sidelines of the UN Human Rights Council Session.

Sri Lanka's Deputy Permanent Representative to the UN at Geneva Manisha Gunasekera speaking here stressed on the values of cooperation & mutual respect between members states of the Vienna Declaration.

A group representing the countries Attorney General's Department is also in participation at the UN Human Rights Council Session currently underway in Geneva.

This group is due to handover the investigative report on the deaths of 17 French aid workers in Muttur, & 5 Tamil nationals in Trincomalee to the UN Human Rights Council Session.