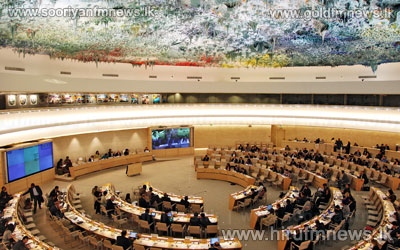 The US in its opening address at the UNHRC sessions in Geneva today stated that the Council’s work remained unfinished as long as Sri Lanka continues to fall short of implementing the recommendations of its own Lessons Learnt and Reconciliation Commission.

Assistant Secretary of State for International Organizations of the United States of America, Esther Brimmer stated that the Council’s work was not complete as long as Sri Lanka fails to address the underlying sources of its long standing ethnic conflict.

Meanwhile the government under its National Plan of Action to implement the recommendations Lessons Learnt and Reconciliation Commission is in preparing to conduct an island wide census on deaths and injuries to people and on damages to property during the three decades of conflict.

Accordingly, the census, to be conducted jointly by the Ministry of Public Administration and Home Affairs and the Department of Census and Statistics, will cover the conflict period from 1983 up to the end of war in May 2009.

The LLRC in its final report had recommended conducting a professionally designed household survey covering all affected families in all parts of the island to ascertain firsthand the scale and the circumstances of death and injuries to civilians as well as damage to property during the period of the conflict.

The LLRC has also recommended devising a centralized system of data collection at the national level, integrating all information with regard to missing persons.

The Sri Lanka Permanent Mission in Geneva has made formal protest against the screening of the latest Channel 4 documentary film “No Fire Zone: The Killing Fields of Sri Lanka” organized by Human Rights Watch, Amnesty International and FIFDH at the Palais de Nations in Geneva on the 1st of March next month.

In a letter addressed to Ambassador Remigiusz Achilles Henczel, President of the Human Rights Council, Sri Lanka’s Permanent Representative to the UN Ravinatha Aryasinha has stated that Sri Lanka views this film, as well as the timing of its broadcast as part of a cynical, concerted and orchestrated campaign that is strategically driven, and clearly motivated by collateral political considerations.

The rights group documented 75 cases of predominately Tamil men and women who said they were held in Sri Lankan detention centers and were purportedly repeatedly raped and sexually abused by the military, police and intelligence officials.

Meenakshi Ganguly, the rights group's South Asia director, addressing a conference in New Delhi had told journalists that HRW had found that rape was used to secure some sort of confession, and also as a political tool to punish suspects.

Against this backdrop Sri Lanka's High Commissioner to New Delhi Prasad Kariyawasam said that he had no evidence to suggest that these purported allegations of abuse, which the rights group said occurred from 2006 to 2012, were true.

Ambassador, Prasad Kariyawasam, also states that the testimonies of 41 women, 31 men and 3 boys were likely made by "economic refugees" who "need a good story" to get asylum.

He noted that the report was "a well-timed effort" to discredit Sri Lanka ahead of a vote on a U.S.-backed resolution criticizing it at the U.N. Human Rights Council in Geneva this week.