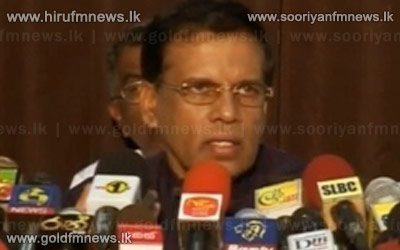 Minister Maithreepala Sirisena spoke to media for the first time regarding the incident that took place at the Batticaloa - Pasikuda coast where the minister's son had assaulted the son of DIG Ravi Vaidyalankara.

During his statement Minister Sirisena criticized all media institutions.

Reports stated that a group of individuals including Daham Sirisena, who is a son of Minister Maithreepala Sirisena had assaulted Asela Vaidyalankara, the son of DIG Ravi Vaidyalankara on the 24th.

Asela Vaidyalankara had the following to say regarding the assault.

However, 13 individuals, including the son of Minister Maithreepala Sirisena were arrested in connection with the assault on the 24th but were released on police bail on the same day.

However, Commissioner of the Human Rights Commission Prathiba Mahanama Hewa stated that while the victim is hospitalized, police bail cannot be granted.

Speaking during the press conference Minister Maithreepala Sirisena stated that he had spoken to the DIG and his son.

Although the minister criticized media institutions, our news team had been unable to get in touch with the minister, his son or any of their relatives till today.

We also obtained the cellular phone number of the minister's son Daham Sirisena from a coordinating secretary of Minster Sirisena.

Thus we tried to reach Daham Sirisena on 071 645 4442 and since there was no response, we have left a SMS requesting him to get in touch with our news team.

However, we have not received a response yet.

However, we will report all the main facts stated by Minister Maithreepala Sirisena in this manner.

Minister Sirisena stated that this was an attempt at destroying his political image.

The minister also made the following comments regarding the children of the country.