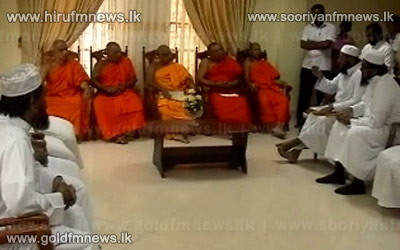 Discussion in society regarding Halal certification has not abated.

All Ceylon Jamiyyathul Ulama Association yesterday stated that the Halal certification process should be taken over by the government.

The Bodhu Bala Sena Organization had organized a press conference today in Colombo to respond to the statement made by the All Ceylon Jamiyyathul Ulama Association.

Speaking at the press conference the secretary of the Bodhu Bala Sena Organization Venerable Galagodaaththe Gnanasara Thero stated that if the government accepts the responsibility of issuing Halal certification which is part of Sharia law, that would be a violation of the constitution.

Meanwhile the UNP has appointed a committee under the patronage of UNP parliamentarian Kabir Hashim to look into the issue regarding the Halal certification.

Speaking at a function held at the party headquarters in Sirikotha, UNP leader Ranil Wickramasinghe stated that the government has not taken sufficient steps to solve this issue.

Speaking during the launch Venerable Omalpe Sobitha Thero stated that his party is not against Halal.

Meanwhile, several representatives of the All Ceylon Jamiyyathul Ulama Association met with the chief prelates of the Malwathu and Asgiri chapters today.

Following the meeting, the secretary of the Halal certification division of the All Ceylon Jamiyyathul Ulama Association Murshid Mulasar gave the following statement to the media.