Whole country made sacrifices on behalf of North says Basil 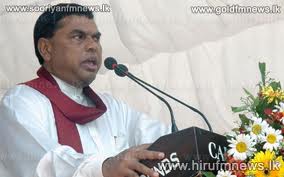 Minister of Economic Development Basil Rajapaksa while addressing a gathering which was held in Adampan- Mannar today expressed views with concern to Wanni parliamentarians who are engaged in an attempt to tarnish the image of the country while in Geneva.

Speaking here Minister Basil Rajapaksa stated that that the entire country had made crucial sacrifices on behalf of the development currently underway in the countries North.

Speaking further Minister Basil Rajapaksa noted that the government expects the peaceful cooperation of all ethnicities in forwarding the interests of the country.

Moreover General Secretary of the Nawa Sama Samaja Party Dr. Wickramabahu Karunarathna speaking during a media briefing convened by the aligned opposition noted that Sri Lanka would find it difficult to garner the support of other countries including India during the UN Human Rights Council Sessions.