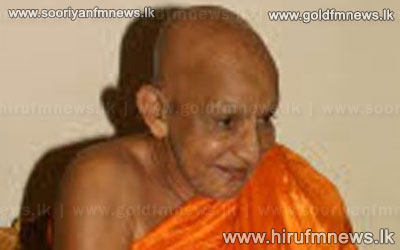 Chief Prelate of the Asgiri chapter most venerable Udugama Sri Buddharakkitha Thero states that if members are removed from the UNP for minor mistakes the party will deteriorate further.

Buddharakkitha Thero stated that the leader of the UNP Ranil Wickramasinghe takes severe decisions at times and that on other occasions he behaves like a child.

The thero made this statement when the UNP general secretary visited the thero today.

Chief Prelate of the Asgiri chapter most venerable Udugama Sri Buddharakkitha thero further stated that the UNP which is the first party of the country has deteriorated and that if the party acts cordially it has the opportunity to achieve power once again.

Most Venerable Udugama Sri Buddharakkitha thero also stated that the opposition leader does not have the support of his party members to put his ideas into action.

General Secretary of the UNP MP Thissa Attanayaka visited the Chief Prelate of the Asgiri chapter after worshipping at the Temple of the Tooth Relic.

During his visit, Attanayaka also stated that the party working committee will take a decision regarding the vacant deputy party leader post during the meeting on the 18th.