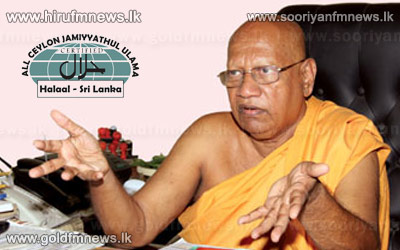 Venerable Professor Bellanwila Wimalarathana Thero states that ending the Halal dispute should not be viewed as a defeat of any particular group.

The venerable thero made this observation while taking part in the media briefing which was held at the Chamber of Commerce this morning.

During this media briefing the Chamber today stated that Halal certification would not be utilized within the future.

Speaking further the Chairman of the Chamber of Commerce Susantha Rathnayeke, expressed the following views to the media.

Meanwhile Murshid Moulasar head of the Halal certification division of the All Ceylon Jamiyathul Ulama Organization who also marked his presence during the media briefing noted that his organization was prepared to do away with the Halal logo if it impinged on national harmony.

Moreover Venerable Professor Bellanwila Wimalarathana thero speaking here noted that it was intellectuals who should resolve such issues.

When inquired by a foreign journalist with regards to the recent course of action of the Bodhu Bala Sena Organization Venerable Professor Bellanwila Wimalarathana Thero had this to say.