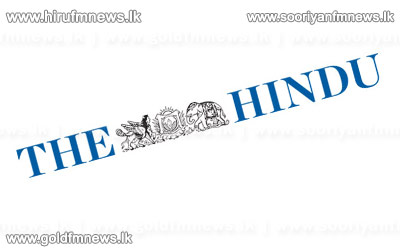 An article appearing in the editorial of the Hindu states that in the context of the draft resolution on alleged human rights violations in Sri Lanka now being submitted before the United Nations Human Rights Council in Geneva, India should factor in domestic political exigencies alongside long-held principles and long-term interests while firming up its stand.

The editorial of the Hindu also notes that last year, India which voted for a resolution in which it urged Sri Lanka to investigate alleged abuses did so after making efforts to water down the resolution.

It also notes that speaking on the matter in the Rajya Sabha on Friday, Prime Minister Manmohan Singh had emphasized the need for national reconciliation in Sri Lanka.

In conclusion the Hindu states that New Delhi should craft a Lankan policy that includes a case for the island’s Tamils, free of the opportunistic imprint of Tamil Nadu’s competitive politics.

Meanwhile the Sunday edition of India's Pioneer newspaper revealing a standpoint of a senior journalist states that, nothing would be more ruinous for India's national interest if Congress were to decide to force Prime Minister Manmohan Singh and Minister for External Affairs Salman Khurshid to vote for the resolution against Sri Lanka moved by the US in the United Nations Human Rights Council.

The column said if Sri Lanka is accused of unfair use of state power against civilians and 'armed opposition', by the resolution so is India charged in some quarters about counter terrorism operations in the Kashmir Valley.

Meanwhile the Tamil Eelam Supports Organization is drawing plans to observe a harthal all over Tamilnadu tomorrow, in support of the US draft resolution against Sri Lanka.