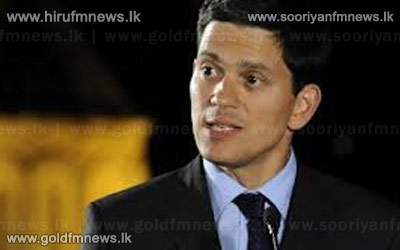 Former UK Foreign Secretary David Miliband has stated that Britain needs to back the call for the Commonwealth Heads of Government Meeting to be moved.

In an article to the British Guardian newspaper Guardian today Miliband states that for the CHOGM summit to go ahead in Sri Lanka would be a mockery of Commonwealth values and UN authority, and a further invitation for its government to ignore international pleas for decency and accountability.

In his article Miliband notes that in early 2009, as foreign secretary, he had traveled to Sri Lanka with Bernard Kouchner, the French foreign minister, so that the duo could witness for themselves the situation at the end of the 26-year civil war.

Miliband also notes that he had met the president and his ministers in Colombo, and had then traveled to refugee camps further North, in order to see the plight of Tamil citizens affected by the war.

The Former UK Foreign Secretary in his article to The Guardian states that this was a moment to show that calls for justice and democracy have teeth while Britain needs to back the call for CHOGM to be moved.