Handover power according to pledges made - UNP tells government 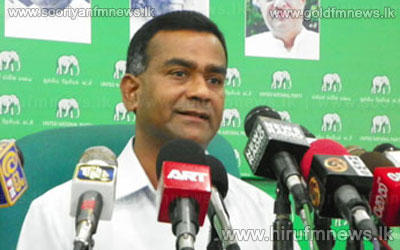 The United National Party states that if the government adheres to pledges made by it & devolves power as per the assurances issued to the international community, such a course of action in turn would assist in averting a myriad of issues by the regime.

Addressing a media briefing held in Colombo today General Secretary of the UNP MP Thissa Aththanayeke made the following observations in this regard.

More than 100 individuals who had protested against Sri Lanka in Chennai have been placed under arrest by Indian security force personnel.

According to sources the group is said to consist of members representing the Tamil Elam Supporters Organization.

The Janata Party president Subramaniyam Swamy said the US has taken a hard stand against Sri Lanka in its draft resolution on the human rights situation in the island nation tabled at the on-going session of the UN Human Rights Council in Geneva and Sri Lanka has categorically refused to negotiate with the US on arriving at a compromise resolution acceptable to all.

Swamy’s expectation is that the final United States resolution will call upon the Lankan government to conduct, on its own, a credible investigation into alleged violations of international laws.

Swamy told Robert O’ Blake in no uncertain terms that it would not be practical to ask Sri Lanka to accept an international investigation.

He pointed out that India too would not be happy with such a demand as there could be a similar demand vis-a-vis Kashmir.

Swamy also pointed out that any resolution passed at the UNHRC would have value and teeth only if it got the sanction of the United Nations Security Council.

In the present case, a Security Council sanction was not possible because Russia or China would veto it.

Swamy said Blake and other American officials were realistic enough to understand the ground situation.

However Minister Nimal Siripala De Silva expressing his views to our news team noted that in a bid to secure congress power the Indian centre is compelled to draw various decisions from time to time.

Speaking further Minister De Silva noted that ties between the two countries had not deteriorated in any manner.