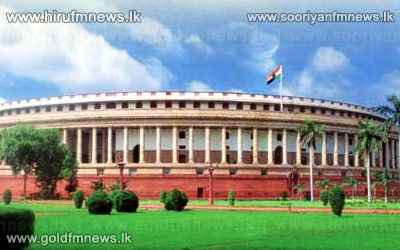 Both houses of the Indian parliament were in an uproar today as well due to MP’s staging protests over Sri Lanka.

Opposition BJP, AIADMK and Congress ally DMK MP’s triggered an uproar over the alleged land deals by kin of a leading politician and plight of ethnic Tamils in Sri Lanka.

Meanwhile David Miliband  Labor’s former foreign secretary, described as "bizarre" the notion of the Queen attending the Commonwealth Heads of Government Meeting in the event of it being hosted by Sri Lanka.

Against this backdrop Sri Lankan High Commissioner to the UK Dr. Chris Nonis requested of relevant stake holders to arrive in Sri Lanka and ascertain the countries ground situation, first hand for themselves.

When inquired by Channel 4’s Foreign Affairs Correspondent Jonathan Millar regarding disagreements at the United Nations, Dr. Nonis charged that it was only channel-4 who were preoccupied with leveling such allegations.

Meanwhile Head of the EU Delegation to Sri Lanka Bernard Savage says that the European Union has concerns on human rights and accountability in Sri Lanka.

The EU representative says that issues of human rights and accountability should be immediately addressed.

Speaking of the reconciliation, process, the EU chief noted that there was not enough done by the Sri Lankan government.

In the interim General Secretary of the United National Party MP Thissa Aththanayeke expressed the following views with regards to Geneva during a media briefing which was convened in Colombo early today.

It is also reported that the President’s Special Envoy on Human Rights Minister Mahinda Samarasinghe is due to leave for Geneva this evening.

While in Geneva, Minister Samarasinghe is due to take part in the Universal Periodic Review of the island, where he is also due to deliver a statement on the progress achieved by Sri Lanka during the post war period.

The following are views expressed by Minister Mahinda Samarasinghe recently regarding his agenda in Geneva.