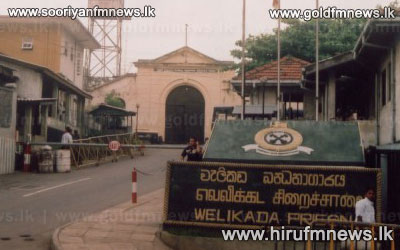 The fast launched by three prisoners at the Welikada Prison continues.

Last Sunday a prisoner sentenced to death climbed to the prison roof and began a fast demanding that he be either released or his death sentence be executed.

A Welikada Prison spokesman told our news team that afterwards on Monday two more prisoners sentenced to death joined the fast in support of the said demand.

Reports say that yesterday one of them climbed down.

Earlier too several prisoners on death row at the Bogambara Prison had climbed the prison roof and launched a similar fast.

Meanwhile the Vavuniya Prison was reopened after reconstruction.

That was under the patronage of Prisons and Reforms Minister Chandrasiri Gajadheera.

On this occasion the Minister said that the prison staff was carrying out one of the most serious duties in Government Service.