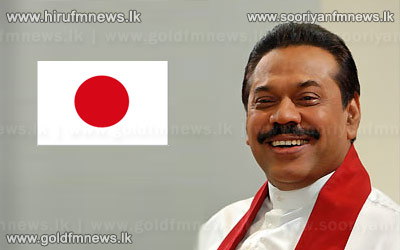 President Mahinda Rajapaksa who is on a four day official visit to Japan attended several events of social and bilateral significance yesterday.

The President participated in the inauguration of the Sri Lanka food festival at Hotel Imperial, aimed at bringing greater awareness of the country’s cuisine and beverages in Japan.

Former Premier Fukuda told President Rajapaksa that he had been very impressed with Sri Lanka’s rapid development during his visit on an earlier occasion.

He said that Japan was happy about the peace and progress Sri Lanka has achieved.

In the afternoon the President visited ‘Tama’ zoo in Tokyo where he gifted two baby elephants as a mark of 60 years of diplomatic relations between Japan and Sri Lanka.

During the visit, President Rajapaksa is expected to hold discussions with Prime Minister Shinzo Abe and have an audience with the Emperor and Empress of Japan who will also be hosting a lunch for the President and the First Lady at the Imperial Palace.

President Rajapaksa is scheduled to host a breakfast meeting for leaders of Japan’s corporate and industry sectors as well as attend the inaugural ceremony of the Sri Lanka Business Forum.

In addition to several bilateral meetings with Japanese ministers and government officials, President Rajapaksa is also scheduled to attend a meeting of the Japan -Sri Lanka Parliamentary League and meet with Ambassador Yasushi Akash