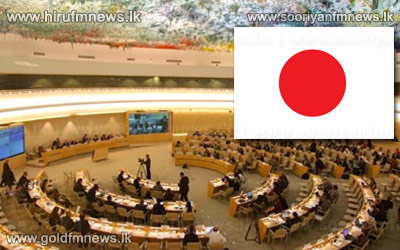 Delivering a statement at the United Nations Human Rights Council General Debate on Country reports by the High Commissioner, Japan welcomed Sri Lanka's "certain" progress on resettling IDPs and its cooperation with the international community such as by accepting an Office of High Commissioner of Human Rights mission.

Japan also noted that there are challenges to the steady implementation of the National Action Plan, including the issues of holding Northern Provincial Council elections and establishing the Public Service Commission in a timely manner.

Japan hoped that Sri Lanka in future would take up the LLRC recommendations currently not included in the National Action Plan and steadily achieve concrete outcomes towards the realization of national reconciliation.

Meanwhile, The European Union says there has been limited progress on the human rights situation in Sri Lanka last year.

Ireland Ambassador Gerard Corr, speaking at the UN Human Rights Council on behalf of the EU said that the current human rights situation in Sri Lanka and accountability and reconciliation should remain on the agenda of the Council.

Ireland holds the Presidency of the Council of European Union in the first half of 2013.