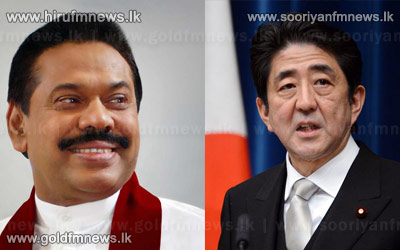 Japanese Deputy Prime Minister Taro Aso, said when he met with President Mahinda Rajapaksa for discussions yesterday that Western nations are underestimating the development in Sri Lanka since the end of the conflict.

President Rajapaksa is currently on a four day official visit to Japan which began Monday.

Aso who was a former Prime Minister of Japan is currently holding the position of the Finance Minister as well.

President Rajapaksa while thanking Japan for its assistance to Sri Lanka’s development remarked that leaders and people of the world should visit Sri Lanka to see for themselves the progress the country had achieved in all aspects in recent times.

Ambassador Yasushi Akashi also met with the President at a private lunch.

During the visit President Rajapaksa is expected to hold discussions with Japanese Prime Minister Shinzo Abe today and have an audience with the Japanese Emperor and Empress who will also be hosting a lunch for the President and the First Lady.