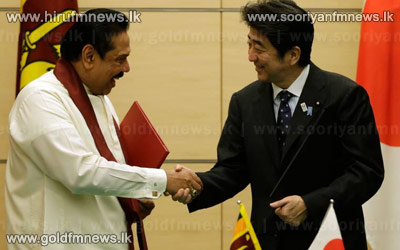 Sri Lanka and Japan agreed to work towards expanding maritime cooperation between the two countries, especially with Sri Lanka's potential to become a maritime hub in the region using its unique location on the Indian Ocean sea lanes.

This was announced in a joint statement between President Mahinda Rajapaksa and Japanese Prime Minister Shinzo Abe following a summit meeting at the Prime Minister's Office yesterday.

President Rajapaksa is on a four day official visit to Japan.

President Rajapaksa, at the joint press briefing that followed, said Sri Lanka is determined to strengthen the dialogue with Japan towards "developing a sustainable economic partnership," noting that the relations between the two countries have "grown significantly" during the past 60 years since diplomatic ties were established.

Prime Minister Abe also expressed Japan's willingness to develop bilateral relations in the areas of maritime and the economy.

Japanese leaders praised the initiatives have taken by the government of Sri Lanka under the leadership of President Rajapaksa and said that the progress achieved by Sri Lanka following the conclusion of the conflict, is extremely praiseworthy.