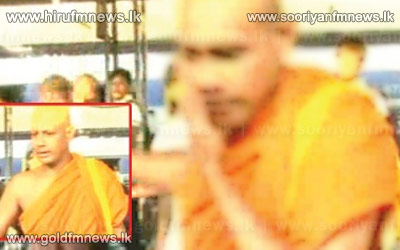 Venerable Vadupola Vangeesa Thero who had been subjected to an attack in a train in Chennai in India returned to Sri Lanka last afternoon.

Buddhist monks of the Bodu Bala Senaa had gone to the Katunayaka International Airport to welcome the Thero.

Speaking to media on this occasion, Venerable Vadupola Vangeesa Thero who had been subjected to the attack explained the objectives of the attackers as follows:

Meanwhile the Chief Incumbents of the Malwatta and Asgiri Chapters say that the Indian Government should quickly intervene for preventing the attacks taking place against Sri Lankan Buddhist monks.

A letter on this with the signatures of the Chief Incumbents was handed over to the Deputy Indian High Commission situated in Kandy yesterday.

Indian deputy high commissioner A Nadarajan who participated in accepting the letter spoke as follows.