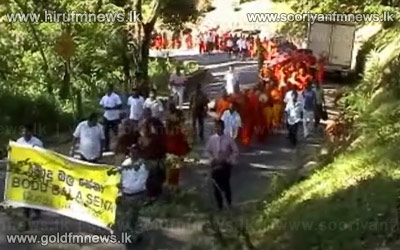 A number of protests were organized today as well against the attacks carried out on Sri Lankan Buddhist monks in Tamil Nadu.

The Ravana Balaya organization today held a protest march from Galle Face to the Indian High Commission in Colpetty demanding the authorities to prevent assault of Sri Lankan Buddhist monks.

Thus during the protest the officials of the Indian High Commission allowed 5 Buddhist monks to enter the high commission.

Convener of the Ravana Balaya organization venerable Iththakande Saddathissa thero made the following statement to the media following the protest.

In support of the protest in the morning, the Inter University Bhikkhu Federation also conducted a protest in front of the Indian High Commission in Colpetty this afternoon.

During this protest 5 more monks were allowed to enter the Indian High Commission to meet with its officials.