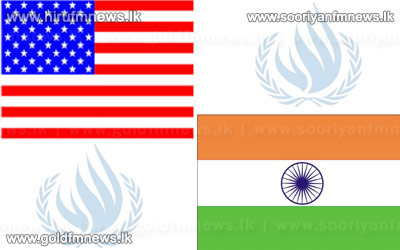 Seven amendments proposed by India to the United States-sponsored resolution on human rights in Sri Lanka were rejected by Washington.

The resolution was passed in Geneva yesterday with 25 votes, including India’s, in its favour.

Meanwhile, US President Barack Obama has hailed the vote on Sri Lanka at the UN Human Rights Council yesterday.

While noting that Sri Lanka has extended an invitation for the United Nations High Commissioner for Human Rights Navanetham Pillay to visit the country, India today urged the High Commissioner to undertake the visit at an early date.

Submitting an Intervention in the United Nations Human Rights Council on the Resolution on Promoting Reconciliation and Accountability in Sri Lanka, India which voted against Sri Lanka as it did last year, hoped the Office of the High Commissioner and UN Special Procedures continue their engagement in accordance with their mandate.