Indian parliament heats up once again over Sri Lanka 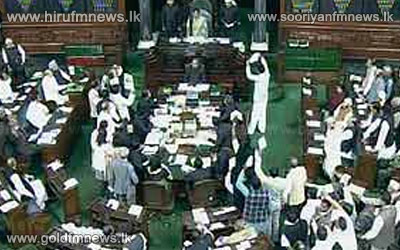 With India voting against Sri Lanka at the UN Human Rights Council yesterday, opposition BJP demanded that the government and DMK spell out the steps they had taken to help ethnic Tamils during the war against LTTE.

The senior BJP leader said the Centre and DMK, which was part of the government when the war against LTTE was fought, should spell out why they did not take steps to resolve the issues faced by Tamils in Sri Lanka.

Both Houses of Indian Parliament were once again disrupted today over the issue of Sri Lankan Tamils and the question hour was lost to protests.

DMK members also raised the issue of Central Bureau of Investigation raids at the residence of party leader MK Stalin.

In the Lok Sabha, as soon as the House met for the day, members from DMK and AIADMK were on their feet protesting against the resolution against Sri Lanka in United Nation Human Rights Council.

Tamil Nadu has been witnessing protests by several pro-Tamil groups and students demanding that Sri Lankan government be made accountable.