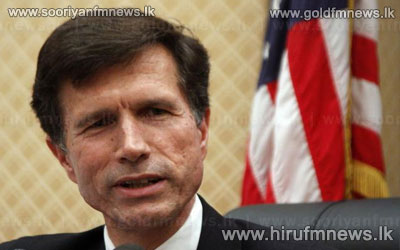 US Assistant Secretary of State for South and Central Asian Affairs Robert Blake states that the US sponsored resolution on Sri Lanka submitted to the UN Human Rights Council was not a watered down document.

In an interview with the BBC Sandeshiya , Blake said that the resolution urges Sri Lanka to work towards reconciliation among all the communities.

He says the resolution does push Sri Lanka to investigate alleged abuses committed during the war and punish those responsible.

Human rights groups had earlier stated that the final draft of the resolution was watered down.

The UN Human Rights Council adopted the US sponsored resolution on Sri Lanka with 25 in favor, 13 against it and 8 abstentions.

The US Ambassador to the UN in Geneva Eileen Donahoe, presenting the resolution to the Council, said that there were 41 co-sponsors to the resolution.

Meanwhile US State Department Spokeperson Victoria Nuland states that the United States will consider an international effort rather than a Sri Lankan-led effort if Sri Lanka is not forthcoming to implement the actions decreed by the resolution put forth by the US in Geneva.

Nuland also noted that that the international community will explore other steps they could implement against Sri Lanka.

Moreover Indian news papers against this backdrop state that India should not attempt to weaken its ties with Sri Lanka, since the island is of strategic interest to India positioned in the Asian continent.