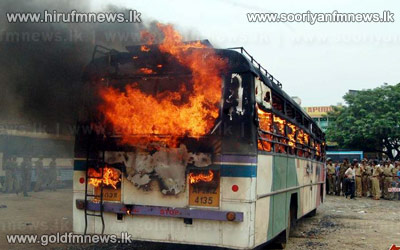 Sixteen tourists from Sri Lanka had a providential escape yesterday as the bus they had been travelling in was reduced to ashes in Kesariya, India.

According to witnesses, only one tourist, R.M. Somruna who is also the team leader, sustained partial burn injuries.

While the tourists were busy climbing the Kesariya Stupa, the tallest such Buddhist stupa in the world, the bus — parked outside the main entrance to the archaeological site — suddenly caught fire around noon.

Although the cause of the fire is yet to be ascertained, a rough estimate has put the loss to be worth 1 million dollars as personal belongings like suitcases, bags, passports and visa documents were charred completely.