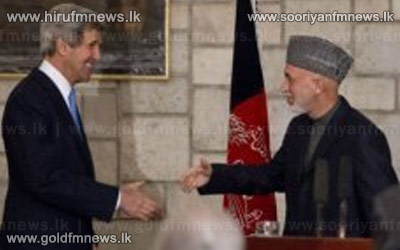 US Secretary of State John Kerry vowed in Kabul to stick by Afghanistan as President Hamid Karzai, after a series of fiery outbursts, hailed a "good day" for ties with the handover of a military jail.

Kerry came to Afghanistan on an unannounced visit just after the United States, acceding to a long-standing demand of Karzai, delivered full control of the prison at Bagram to Afghan forces.

Karzai had turned the fate of Bagram and its hundreds of detainees into a rallying cry for his ill-tempered push to grab back sovereignty from the Americans, as US-led combat troops wind down more than a decade of war.