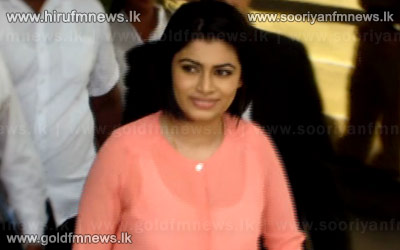 Colombo additional magistrate Pra-harsha Ranasinghe today warned Hirunika Premachandra to come to courts in suitable attire during the hearing of the case filed against Hirunika for threatening and assaulting a businessman.

She had appeared in courts dressed in slacks and a top inappropriate for court.

4 others including Hirunika Premachandra had threatened and assaulted a businessman at his business premises located at Number 175, Kynsey road on the 14th of this month.

The suspects including her were arrested and subsequently released on bail.

The suspects who appeared in court today were released after being ordered to post 8 personal bonds of 100 thousand rupees each.

The Additional Magistrate adjourned the hearing till the 31st of July.

Attorney at Law Pavithirka Fernando who appeared on behalf of the complainant Dhammika Siriwardana spoke to our news team following the hearing and had the following to say.