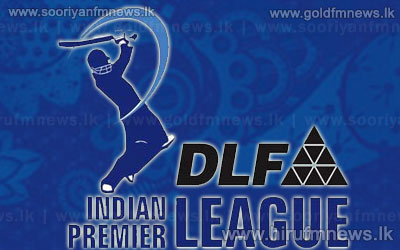 The ministry of sports has decided to personally inquire regarding the Sri Lankan cricketers’ desire to play in the IPL prior to their participation.

Speaking to our news team sports minister Mahindananda Aluthgamage stated that the Indian government has agreed to provide special security to the Sri Lankan cricketers who are taking part in the IPL.

The Indian Premier League which is commencing on the 3rd of April will be held in 13 cities in India including Chennai in South India.

Meanwhile, an Indian Premier League team owned by the grand-nephew of party chief M Karunanidhi has two Sri Lankan players, including the captain.

Now people in the city suggest Kalanidhi Maran sack the two Lankan players on his team.

DMK leader and actor Khushbu said she was "sure the Sun Group will take a call on this issue.

Meanwhile, former Sri Lankan skipper Arjuna Ranatunga stated that at a moment where two Sri Lankan players have been removed from the IPL the other players also should refuse to play in the IPL.

Meanwhile, Royal Challengers Bangalore's Muttiah Muralitharan is disappointed after the BCCI decided to keep Sri Lankan players away from the IPL matches in Chennai over anti-Lankan unrest in Tamil Nadu.