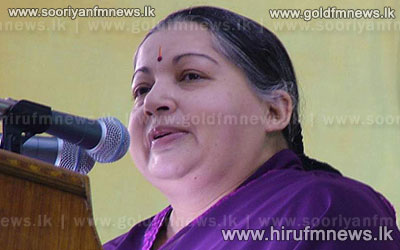 The Tamil Nadu Chief Minister Jayalalitha Jayaram has requested students who are engaging in higher education to conclude protests against Sri Lanka.

She further stated that since a proposal has been adopted in the Tamil Nadu Assembly regarding Sri Lankan Tamils, there is no need for further protests.

She also stated that the Tamil Nadu Assembly has made a promise to the Tamil population on behalf of the Sri Lankan Tamils.

Meanwhile, the JVP expressed its views regarding the attitude of India towards Sri Lanka in a press conference held yesterday.

However, Minister Dulles Alahapperuma expressed the following views regarding the anti Indian statements.

Meanwhile, The IPL governing council's decision to exclude Sri Lankan players from matches in Chennai has been met with some disappointment and concern by the other franchises.

They are disappointed at being excluded from the decision-making process, and that the decision taken did not follow precedent. In addition, they are concerned over the possible consequence - that Chennai Super Kings may have an added advantage in their home games.

While Super Kings' Sri Lankan players are not crucial to their plans, several of their compatriots are vital members of their respective teams.

Those teams will not be fielding their first XI when playing in Chennai - both in the league stage and in the knockout stage, in which two matches are scheduled to be staged in Chennai.