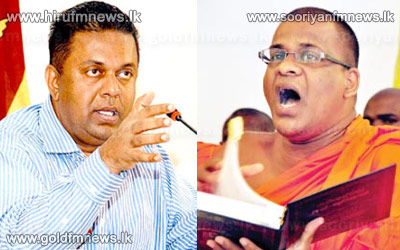 The Bodhu Bala Sena Organization has challenged the United National Party to prove if the actions of the BBS had led to any form of extremism.

General Secretary of the BBS Venerable Galagoda Aththe Gnanasara Thero raised this issue during a media briefing held in Colombo today in reply to a recent statement made UNP MP Mangala Samaraweera.

The following is the statement made by Minister Mangala Samarawickreme & the reply filed by the General Secretary of the BBS Venerable Galagoda Aththe Gnanasara Thero.

The National Sangha Coucil handed over an epistle over to Sri Lanka Cricket today requesting of it to prevent the participation of Sri Lankan players in the Indian Premier League tournament.

The National Sangha Council states that upon having taken into consideration the atmosphere in Chennai & Tamilnadu the safety of Sri Lankan players remain jeopardised.

National Organizer of the National Sangha Council Venerable Baththaramulle Dayawansa Thero speaking to our news team expressed the following views in this regard.

Moreover issuing a release the Jathika Hela Urumaya states that Sri Lanka should take steps to suspend all ties with Tamil Nadu which also includes a travel ban.