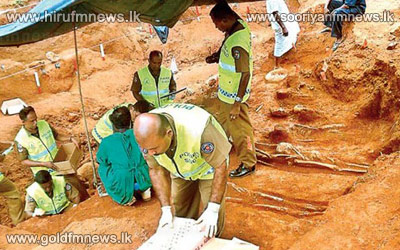 The Front Line Socialist party today filed a complaint before the Human Rights Commission with concern to the skeletons recovered recently from a mass grave located in Matale.

Upon filing the complaint Propaganda Secretary of the Frontline Socialist Party Pubudu Jagoda expressing views to the media noted that according to reports submitted to courts yesterday the incident may be linked to that of a mass execution.

Investigations carried out so far have revealed that the skeletons found at this grave dates back somewhere between 1987 and 1990.

The results of the investigations carried out at the site buy the Archeological Post Graduate institute of the Kelaniya University was handed over to courts yesterday.

Excavators at the site stumbled upon the human remains on the 23rd of November last year when trenches were being dug to construct a bio gas unit.

The remains of 154 skeletons were recovered intermittently at the site on several occasions.

Professor Raj Somadewa of the Post Graduate Institute of Archeology at the University of Kelaniya expressed the following views to our news team in this regard, upon having surrendered the team’s report to court yesterday.