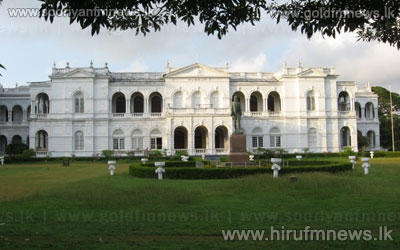 36 individuals including 27 students were injured this afternoon when a flight of stairs at the Colombo Museum collapsed.

According to sources at the Colombo National Hospital those injured include 05 teachers & 4 parents.

Students accompanied by parents & teachers of the Kandy-Galagedara-Girihagama Primary School, Welimada Sumanajothi College & the Middeniya-Dambarella college had been visiting the museum this afternoon when tragedy struck.

According to the Director of the Colombo National Hospital the victims are said to be in a state of shock upon having sustained minor injuries.

It is also reported that Defence Secretary Ghotabhaya Rajapaksa had also visited the injured in hospital this evening.

Moreover in an attempt to verify the condition of those injured our news team contacted Minister of National Heritage Dr. Jagath Balasooriya.