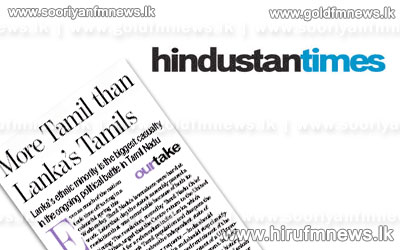 The editorial in the Hindustan Times paper today states that the opposition in Tamilnadu against Sri Lanka is a political ploy to gain mileage, rather than a genuine concern to ameliorate the status of Sri Lankan tamils.

It further states that Tamilnadu resolution backed by the regions Chief Minister Jayalalitha could not be justified under any circumstance.

Set against this backdrop Indian Minister of External Affairs Salman Kurshid stated that India fails to recognize the Tamilnadu resolution against Sri Lanka.

The editor of the Hindustan times also recalled a statement made by former media spokesperson of the LTTE Velayudan Dayanidhi alias Daya Master during which he stated that Sri Lankans now possessed superior clarity with regards to future politics.