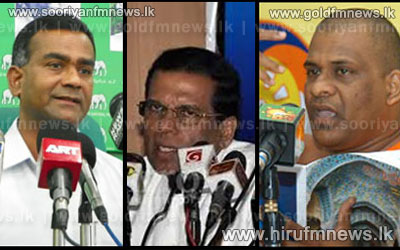 A summit organized by the Bodhu Bala Sensa Organization was convened in the Kelaniya area today.

Here views were expressed regarding the recent attack which was launched on a clothing store in Pepiliyana.

Meanwhile General Secretary of the United National Party MP Thissa Aththanayeke noted that certain parties were keen on creating political instability in the south in order to gain political mileage.

Minister of Health Maithreepala Sirisena has ruled out any and all connections between the Bodhu Bala Sena Organization & the government.

Addressing a media briefing held in Colombo today Minister Sirisena noted that police officers who stood idly by during the attack launched on a clothing store in Pepiliyana were to be blamed for their inaction.