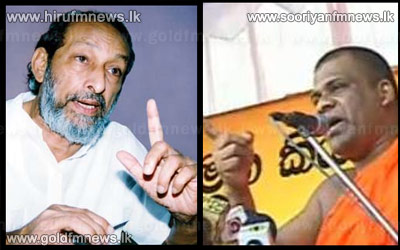 Minister of National Languages & Social Integration Wasudewa Nanayakkara states that he is prepared to present a draft bill to cabinet which calls for the banning of racially inciting statements and behavior.

Speaking to our news team Minister Nanayakkara added that this decision had been reached taking into consideration the current backdrop prevalent in the country.

Bodhu Bala Sena which was held yesterday in Pannala-Kurunegala.

General Secretary of the Bodhu Bala Sena Organization Venerable Galagoda Aththe Gnananasara Thero noted that a language policy should be formulated prior to such decisions in which priority is awarded to the Singhala language.