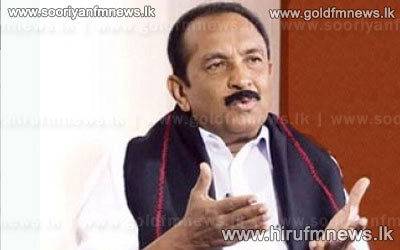 MDMK Leader Vaiko today appealed to Prime Minister Manmohan Singh for his intervention to save the lives of 19 Eelam Tamils currently living in Dubai and to ensure that they are not deported to Sri Lanka.

He said 45 Tamils left for Australia in October from Tuticorin and due to rough conditions, the ship was rescued by a cargo ship which took them to Dubai where the people sought asylum through the International Red Cross.

Meanwhile, at the press conference organized by the Ethera Api organization which is affiliated to the JVP, ideas were expressed regarding the protests against Sri Lankan players at the IPL.

The Ravana Balaya organization engaged in a protest in front of Sri Lanka Cricket against the Sri Lankan cricketers who are taking part in the IPL.

The convener of the Ravana Balaya organization, venerable Iththakande Saddathissa thero had the following to say with regard to the protest.

However, at a function held in Jaffna yesterday, Minister of Construction, Engineering, Housing and Common Amenities Wimal Weerawansa stated that South India is preparing to create another conflict.