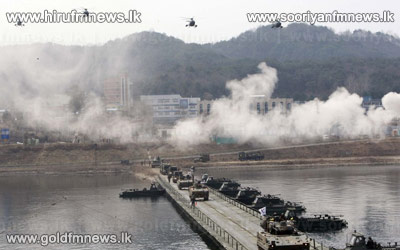 The North Korean army said it had final approval to launch "merciless" military strikes on the United States, involving the possible use of "cutting-edge" nuclear weapons.

In a statement published by the official KCNA news agency, the General Staff of the Korean People's Army said it was formally informing Washington that reckless US threats would be "smashed by... cutting-edge smaller, lighter and diversified nuclear strike means".

North Korea had threatened a "pre-emptive" nuclear strike against the United States a month ago, and last week the supreme army command ordered its strategic rocket units to combat status for strikes on the US mainland and US bases in Guam and Hawaii.

Meanwhile the Bureau of Foreign Employment says that in coincidence with the appearance of a tense situation in the Korean peninsula, the Bureau has focused its attention on the safety of Sri Lankan employees working in South Korea.

The Bureau of Foreign Employment said that a relevant discussion too had been held recently under the patronage of the Minister.